Following the Buffalo Sabres’ 40th Anniversary Exhibit, OW|EN developed a second display to occupy the same cases on the second-floor mezzanine of the HSBC Arena. Once again borrowing hockey memorabilia from the collection of Joseph E. Gambacorta, DDS, our design team came up with a new story to tell that would commemorate those who scored the goals, those unafraid to get tough on the ice, and those who blocked shots.

While reassessing Dr. Gambacorta’s extensive collection of Sabres team artifacts, we noticed that the most prevalent player collectibles in his collection were hockey jerseys and sticks – common souvenirs among fans. Using this lens, we created a relatable narrative told through these items.

OUR CLIENT
THE BUFFALO SABRES 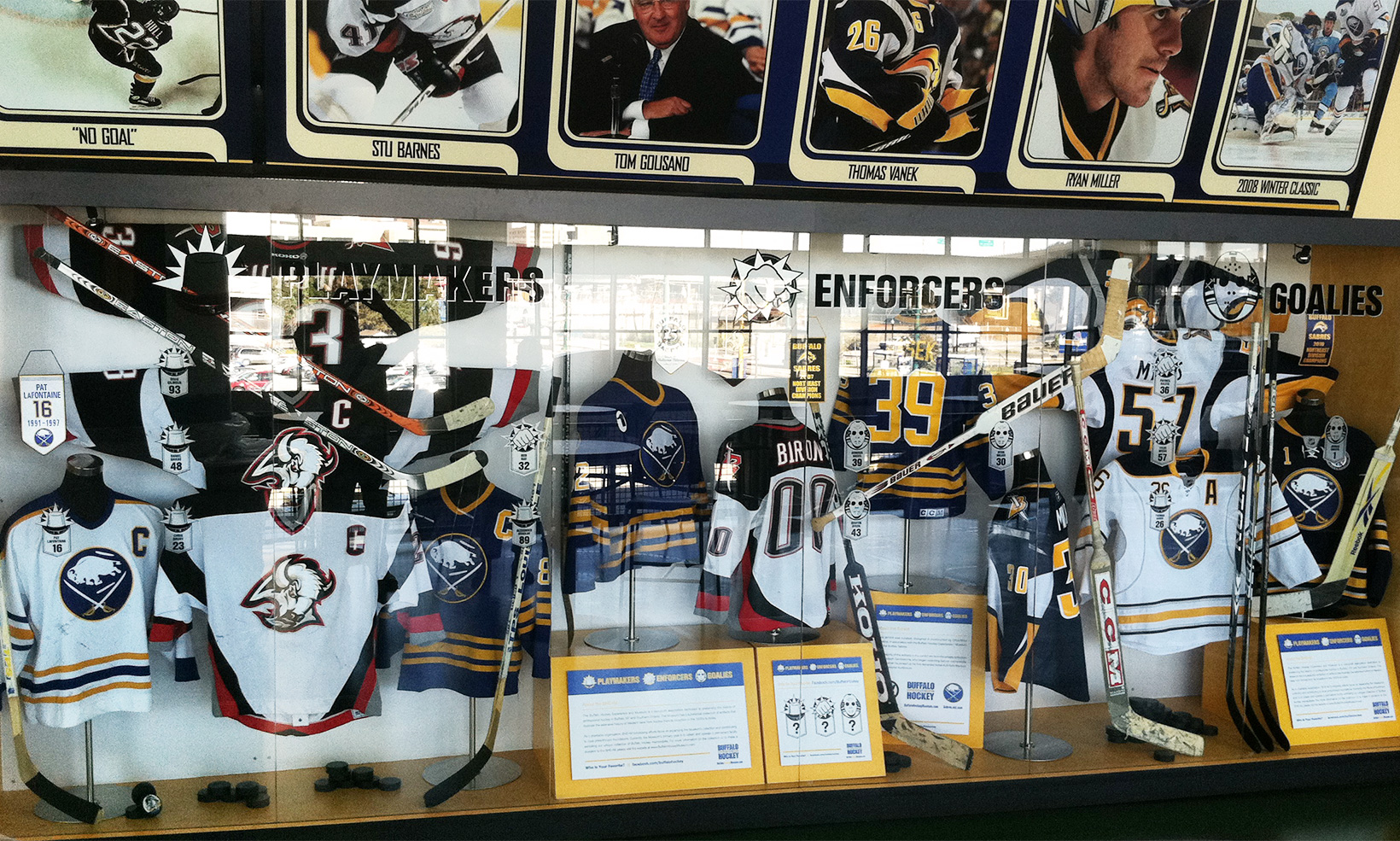 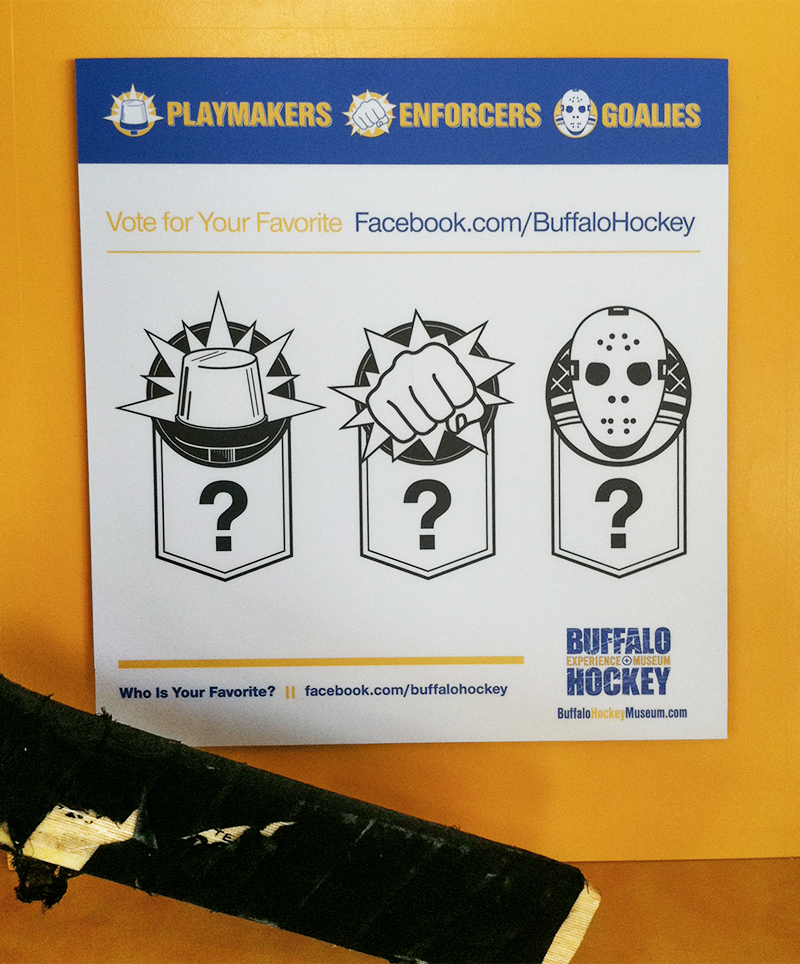 A classification system divides players into one of three categories according to their respective role: playmakers, enforcers or goalies. Custom-designed icons for each category were printed as frosted black and white vinyl and adhered to the inside of the glass, allowing fans to quickly scan the case and identify the players and their roles. 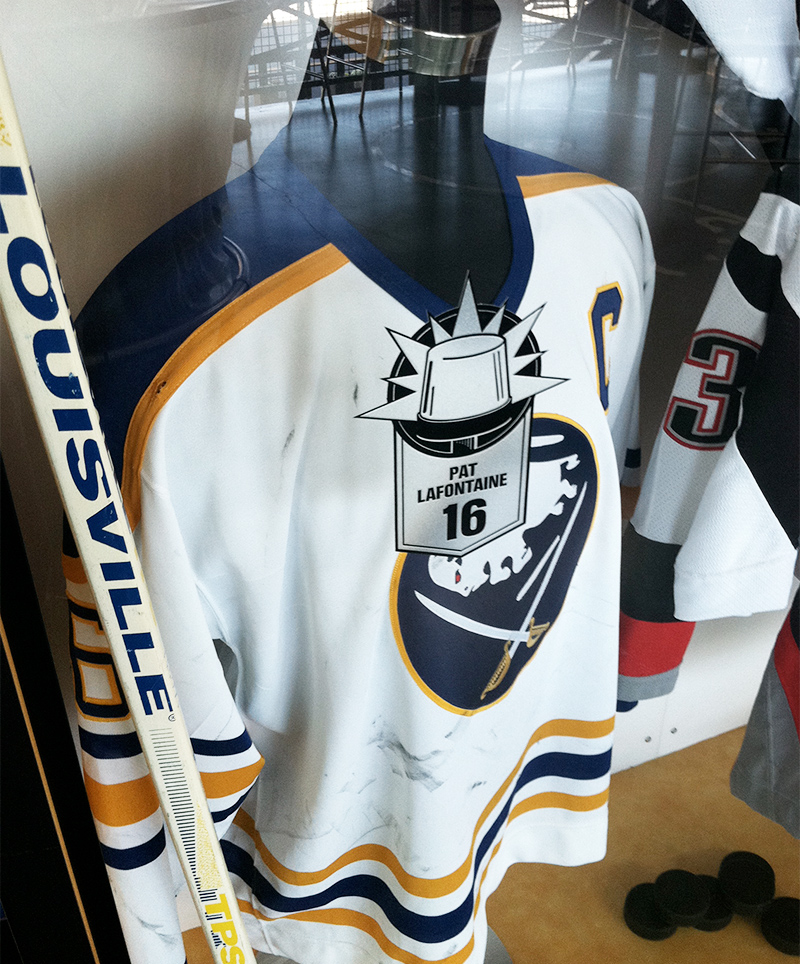 For the Playmakers, Enforcers and Goalies exhibit we developed various mounting systems to allow a variety of display and hanging configurations. This assemblage of Sabres’ jerseys, memorabilia and hockey sticks – some hanging in mid-air – created a pleasant visual balance of collectibles. 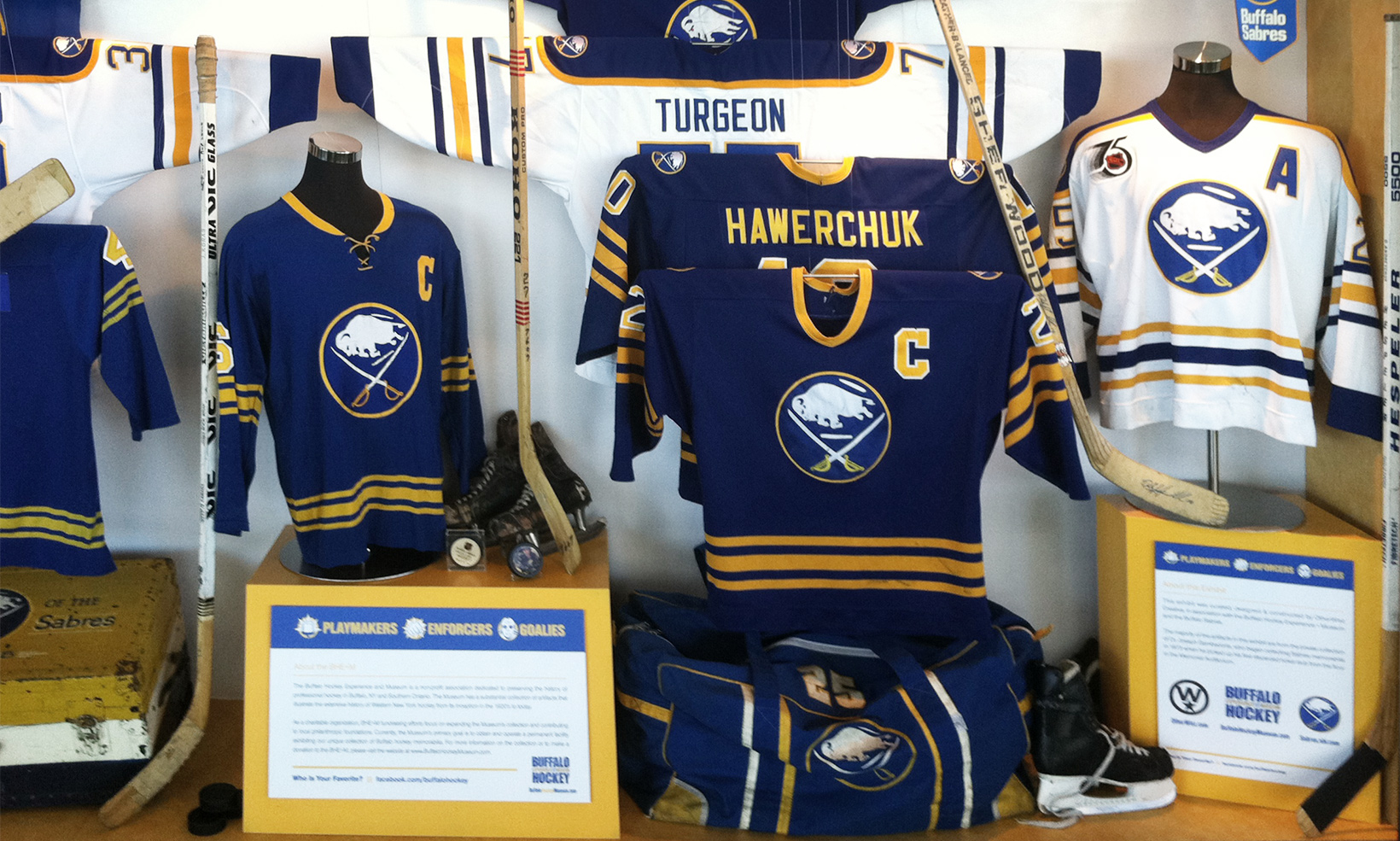 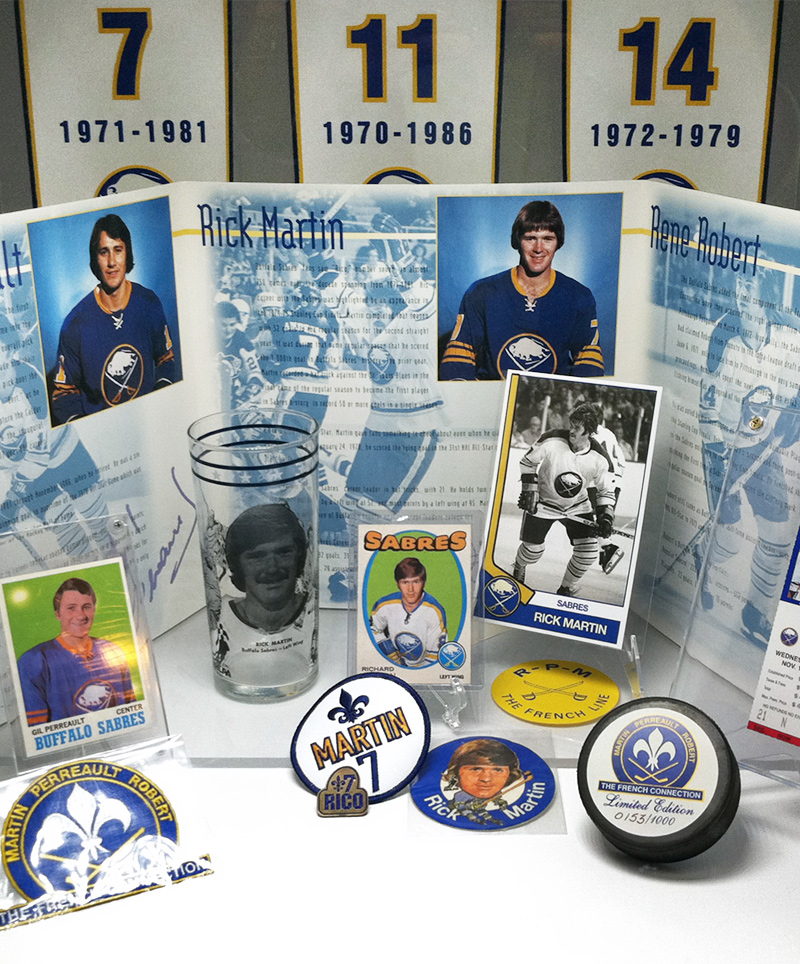 To complement the two large display cases, OW|EN also designed 5 mini-display vignettes that each told their own story. These exhibits sat within glass-covered insets on the nearby wall, highlighting: the Aud Club, collectibles of the famed French Connection, vintage hockey cards, team buttons and homemade fan badges, and a final case commemorated the Buffalo Sabres’ European Games in Germany the previous season. Each display had an accompanying story showcased on a wall-mounted information panel. 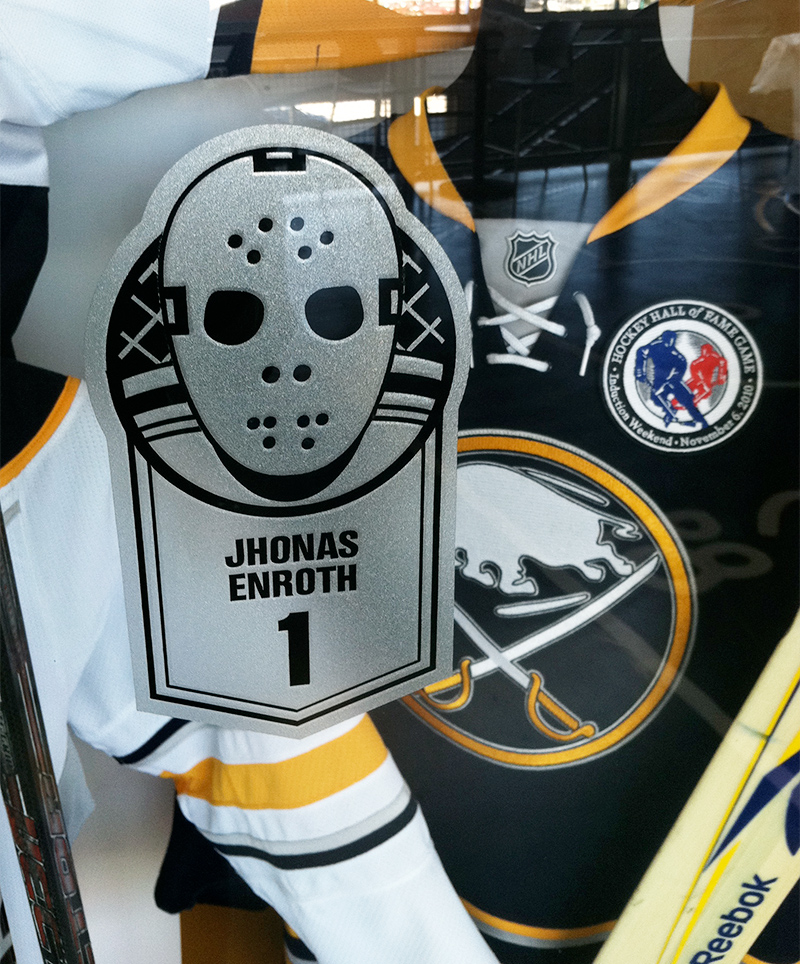 The Playmakers, Enforcers & Goalies display was well received by fans and became a big attraction before games and between periods. With the help of OW|EN, fans were able to capture a glimpse into the team’s history as seen through the eyes of its biggest fans, collector Dr. Joe. 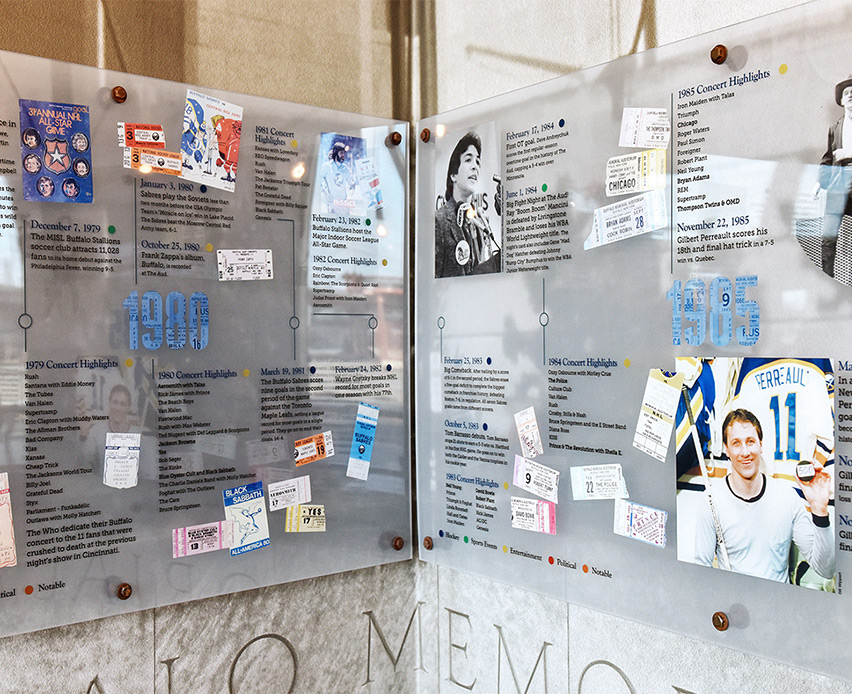 Link to: Forging A Connection Exhibit 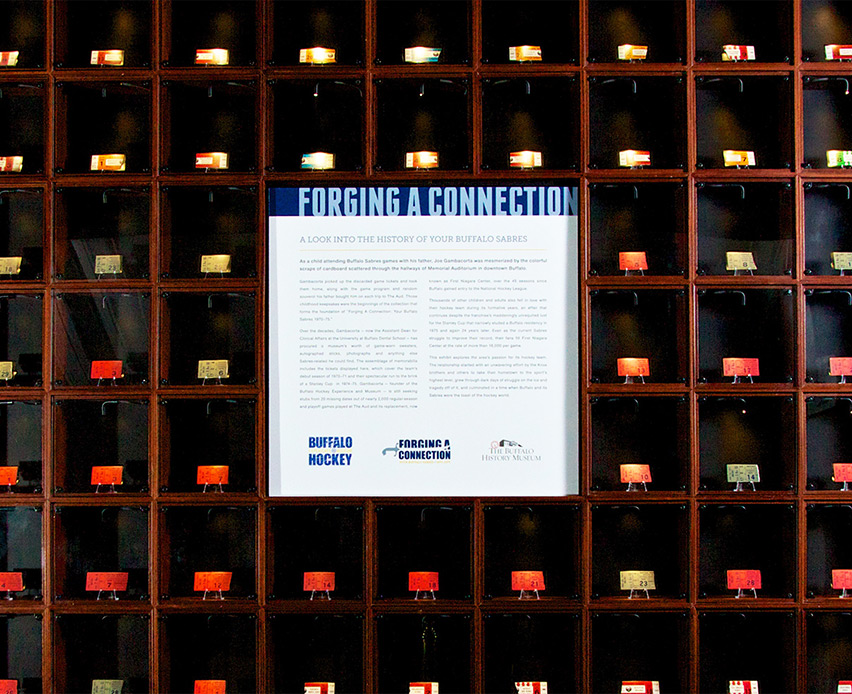 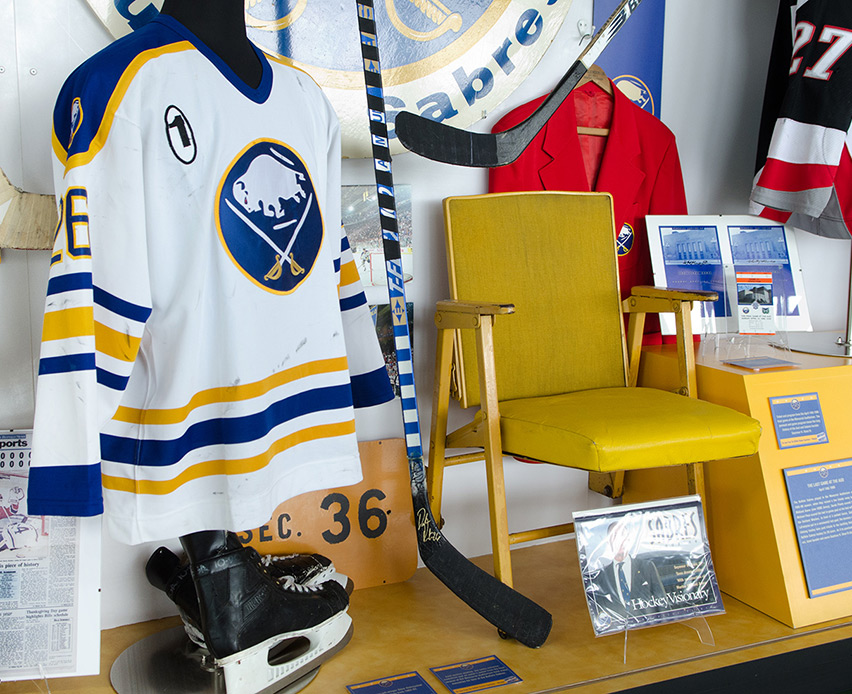